Brian Washburn and Jon Allen were featured at The Hex Factory from October 5th through December 31st. While both exhibits appear quite contrasting at first, Washburn and Allen’s contemporary takes on traditionalism fit the gallery like a glove.

Allen’s works are self-proclaimed to be a “key to the past”, and this perspective is made clear through his use of Germanic runes and pre-Christian imagery. This aesthetic is one shared by Hunter Yoder, and the idea of returning to a pre-monotheistic time is explored both explicitly, in Yoder’s new book, "Heiden Hexology: Essays and Interviews", and implicitly in his work.

Something that connects Allen and Washburn’s work is the focus on texture. Allen’s work making use of spiral and almost Ben-Day dot like patterns, and Washburn using watercolor paper and thick layers of neutral colors to create an aesthetic reminiscent of tonalism. The overall effect is almost that of a simplistic, abstract George Inness, yet instead of broad landscapes, Washburn depicts smaller slices of life, and, as he puts it, “observed moments of my daily life”.

The moments themselves are depicted through archetypal forms and seem to go hand-in-hand with the titles of the individual pieces which give the viewer a greater idea of what it is they are seeing, such as “Mouse Trap” and “Oceanus”, while other titles such as “C’est N’est Pas Une Pipe” (translated to “this is not a pipe”), a reference to Rene Magritte’s painting of the same title, don’t seem to give away much.

The most stunning works from the Washburn collection are “C’est N’est Pas Une Pipe”, “Oceanus”, and “#56 Untitled”, the latter being my own personal favorite. “#56 Untitled” features a strong figure made up of geometrical shapes, outlined in bold, dark lines of what appear to be oil stick, and this contrasts beautifully with the creamy background. “C’est N’est Une Pipe”, Hunter Yoder’s favorite, features spiral-shaped forms, including what Hunter and I speculated to be a Hookah pipe, in spite of the title. Washburn makes much more use of dimension, lines, and implied light and shadow in this piece, making it perhaps the most visually stunning out of the five pieces featured. The focus of “Oceanus” is another very geometric shape, similar to that of “Untitled”, but with a more white-washed background, which only makes the darkly filled center form pop more.

My favorite from the Allen collection is the small piece featuring laguz. The laguz, meaning water, is embodied in the blue color spectrum and pattern of tiny runes in the background that look like rain drops from a distance. Hunter’s favorite is the red kenaz piece. Kenaz, meaning torch, is embodied by the red colors and swirly, fiery brush strokes. It is framed in by four walls of red runes, and is the first piece your eyes settle upon out of the whole collection. Other notable mentions include the other kenaz piece colored in green and orange, an interesting take on the rune, and the spiral piece of orange and green. 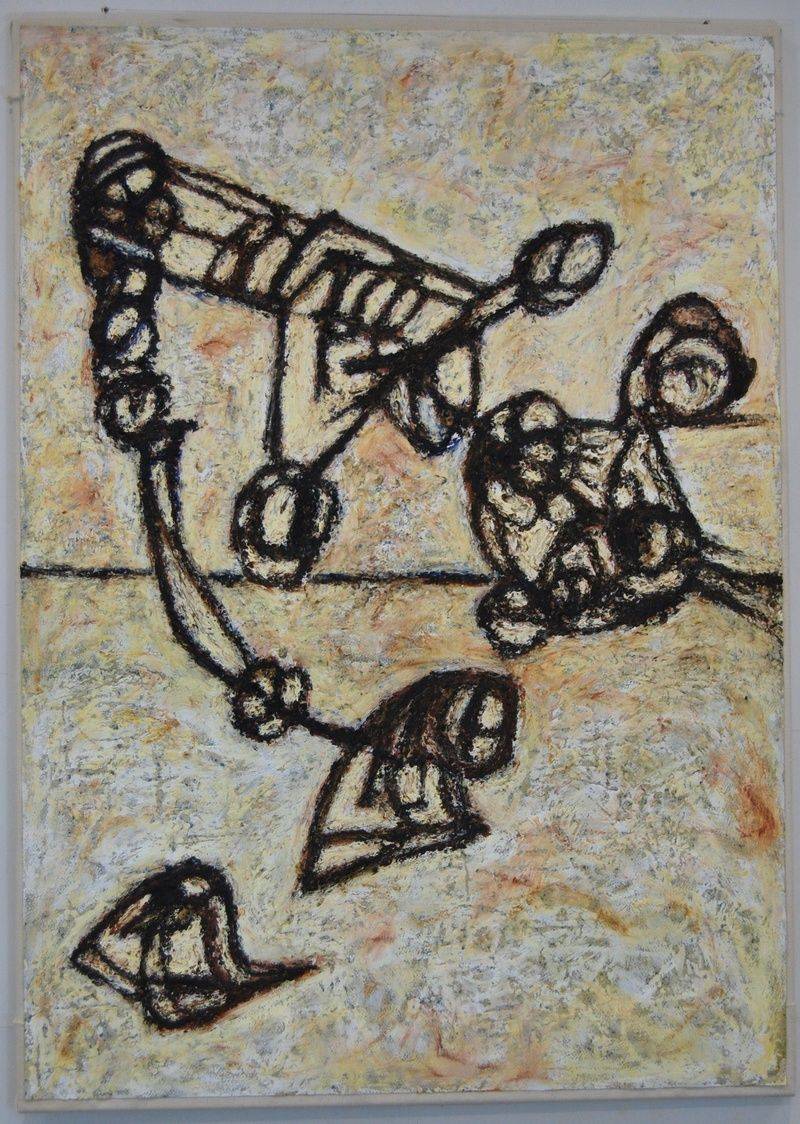 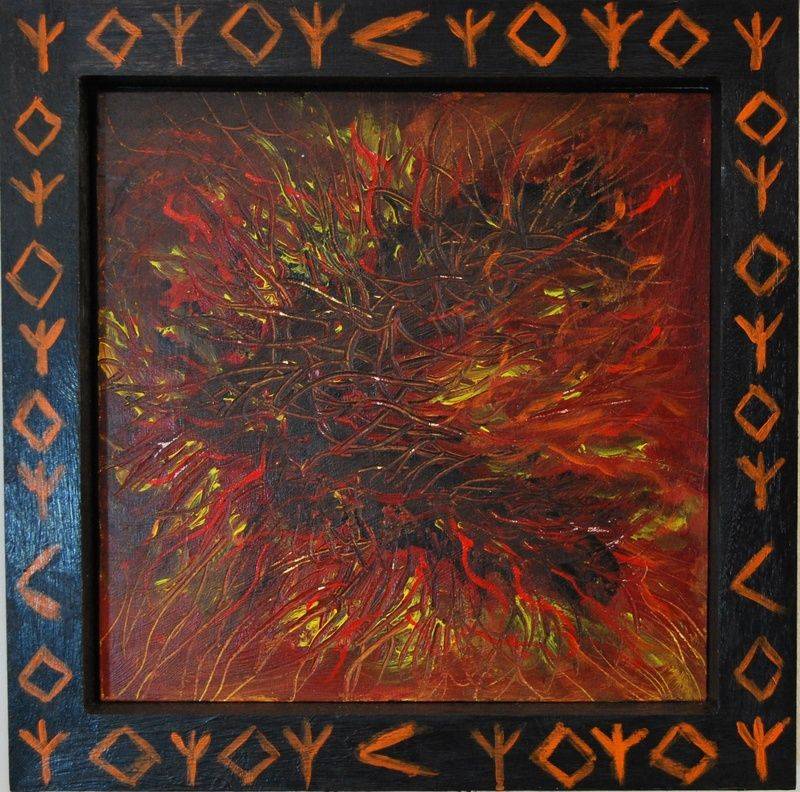 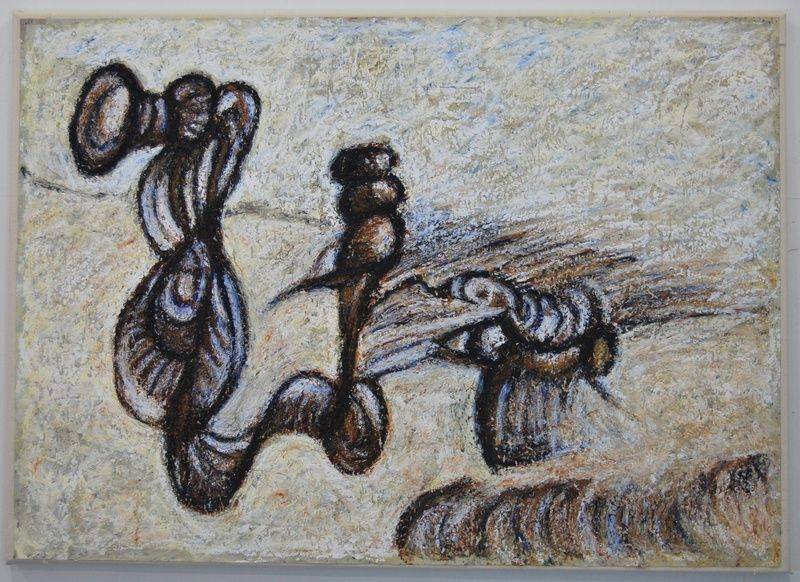 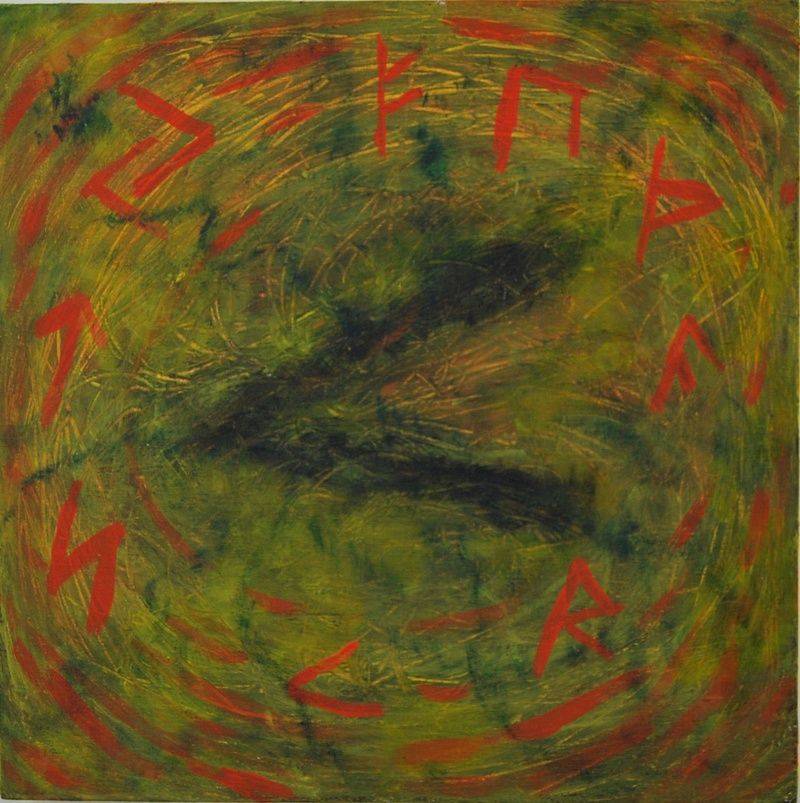 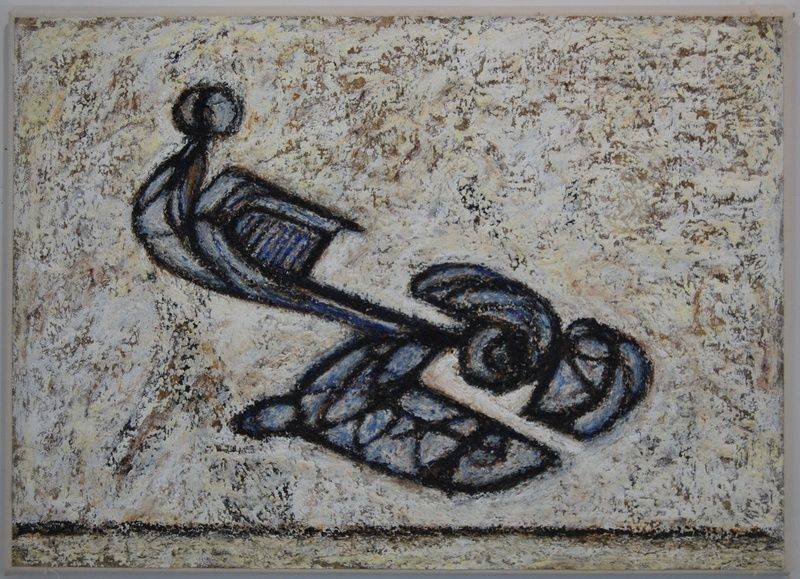 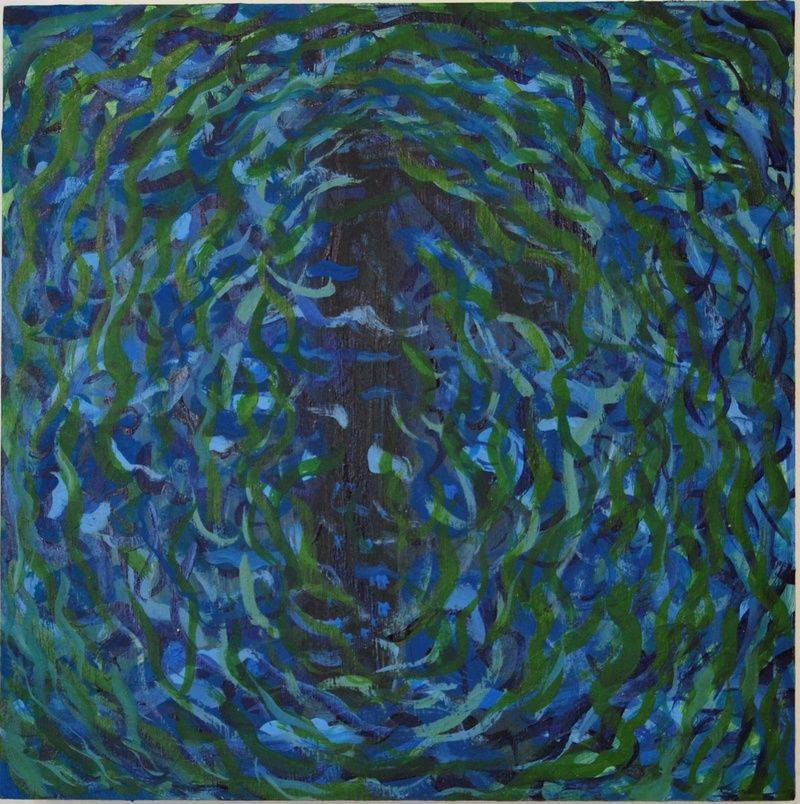 Audrey Murten is a freelance writer from Park Slope, Brooklyn, NY, who has been around both Hexerei and Contemporary art since a child, she has also sold some her own Hex work to well known Folk Practitioners. Look for her latest book on literary criticism coming out this Spring.